Fear of catching Covid-19 will now cost you more than sleep in Ohio. The Ohio state government has asked employers to report anyone who refuses to return to work because they are concerned about the coronavirus pandemic. Reported workers may be ineligible for unemployment benefits.

The coronavirus has now claimed more than 73,000 lives in the US, more than a 1,000 of them in Ohio alone. Quarantine measures have triggered an unprecedented wave of job losses and the state’s unemployment fund is in crisis.

Ohio’s department of job and family services has now asked employers “to report employees who quit or refuse work when it is available due to Covid-19”. The information collected on the “Covid-19 Employee Fraud” form can then be used to evaluate potential unemployment benefits claims from people who are refusing “suitable work”, and are thus ineligible for benefits.

Ohio started reopening non-essential businesses last week. Polling shows the majority of the state’s residents oppose reopening the economy, and the state, like the rest of the US, still lacks the tests to assess the true scale of infections.

An email sent to employers last Friday notifying them of the form said: “Ohio law prohibits individuals from receiving unemployment benefits if they refuse to accept offers of suitable work, or quit work, without good cause.”

Kimberly Hall, the department’s head, told reporters on Monday that the department will look at claims of employee fraud on a case-by-case basis.

“We recognize that there could be a difference of opinion in regards to whether or not an employer is meeting health and safety standards,” she told reporters. “It’s basically a reasonable person’s standards.”

Like many states, Ohio has been grappling with challenges of balancing the health of the economy while Covid-related deaths continue in the state.

The state has said it does not have the capacity to test people who are experiencing mild symptoms. As it works toward its goal of administering 22,000 tests a day by the end of the month, it is prioritizing essential healthcare workers and patients who are hospitalized or going through a medical procedure.

Employers have voiced concerns that employees are incentivized not to return to work in the case they get more from unemployment payments. If a person’s unemployment claim is accepted, they receive 50% of their normal wage in unemployment insurance, up to $480 a week for an individual, along with an additional $600 from the federal government.

“We are concerned about unemployment serving as a disincentive for individuals who have been laid off to get back to work when the economy reopens,” said a spokesperson for US senator Rob Portman, a Republican from Ohio.

On 1 May, the state allowed healthcare providers, like dentist and veterinarian practices, to reopen and elective surgeries to go forward. Starting Monday, general office workplaces and manufacturing, distribution and construction sites were allowed to reopen as part of the second phase of the reopening plan. 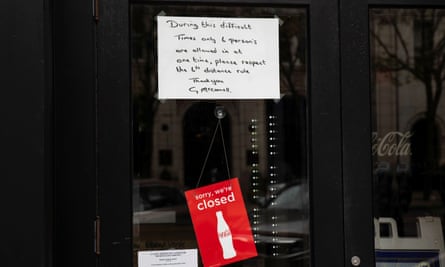 A sign is placed in the window of a restaurant with distancing guidelines as Ohio implements phase one of reopening in Columbus, Ohio, on 1 May. Photograph: Megan Jelinger/Reuters

A host of businesses, such as restaurants, movie theaters and hair salons remain closed, as do schools. Governor Mike DeWine said he will announce this week when those businesses will be allowed to reopen.

Under its reopening plan, the state has issued broad guidelines for safe business practices, including wearing face masks and practicing social distancing. Local health departments within the state are charged with ensuring businesses follow safety protocols.

“With any decision, there’s a risk,” DeWine said when introducing the plan. “What we did today is a risk. Doing nothing is a risk.”

Worker advocacy groups have criticized the government’s crackdown on employees who refuse to return to work due to the virus, saying it will ultimately harm vulnerable workers, especially those who may not have the capacity to properly fight claims from their employer that they can safely return to work.

“Leaving employees, who have little access to evidence needed to prove their employer failed to follow Covid protocols and who are largely without access to legal counsel and advice … will be too much for many with legitimate claims to navigate and will put working Ohioans at a disadvantage,” said a statement from advocacy groups Policy Matters Ohio and Ohio Poverty Law Center.

Tips on Marketing Your Translator Services

How Localization Can Improve Your Content Performance in Foreign Markets

How Do You Ensure Accuracy in Translation?

How to Design Digital Event Experiences for the Future