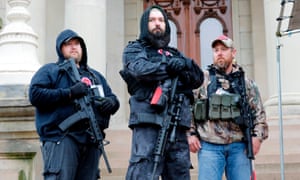 Armed protesters take part in rally on 30 April at the Michigan state capitol in Lansing, demanding the reopening of businesses shut as an anti-coronavirus measure. Photograph: Jeff Kowalsky/AFP via Getty Images

Governor Gretchen Whitmer of Michigan issued a rebuke of the armed protesters who gathered inside the state capitol last week in defiance of statewide lockdown orders, saying the demonstrators embodied some of the “worst racism” of the nation’s history.

“Some of the outrageousness of what happened at our capitol depicted some of the worst racism and awful parts of our history in this country,” Whitmer said during a Sunday interview on CNN’s State of the Union.

Last week Donald Trump had said of the protesters: “These are very good people.”

Hundreds of protesters, many not wearing protective face masks and some armed legally with “long guns”, gathered inside the statehouse in Lansing on Thursday as lawmakers debated the Democratic governor’s request to extend her emergency powers to combat the coronavirus pandemic. The tightly packed crowd attempted to enter the floor of the legislative chamber and were held back by a line of state police and capitol staff, according to video footage posted by local journalists.

State of the Union
(@CNNSotu)

“We have to listen to the epidemiologist and health experts and displays like the one we saw at our capitol is not representative of who we are.” Michigan Gov. Gretchen Whitmer reacts to protesters descending on her state’s capitol, including some who were armed. #CNNSOTU pic.twitter.com/lfPgGnpkGC

Whitmer highlighted that the number of protesters was relatively small but that the imagery some of them used was a disturbing reminder of ugly elements of America’s past. “We know that people are not all happy about having to take the stay-home posture,” Whitmer said on Sunday, “and you know what, I’m not either. But we have to listen to the public health experts and displays like the one we saw in our state capitol are not representative of who we are in Michigan.

“There were swastikas and Confederate flags and nooses and people with assault rifles. That’s a small group of people when you think that this is a state of almost 10 million people, the vast majority of whom are doing the right thing.”

Displaying the Confederate flag, or other symbols of the slave-owning south during the American civil war, is usually seen as racist. While some claim they are celebrating southern identity, it is widely seen as a racist symbol deeply offensive to black Americans. There is also an ongoing campaign to remove Confederate war statues from public display or rename streets and buildings which commemorate Confederate generals or politicians.

The protests continued to draw national attention on Friday when Trump once again threw his support behind the rightwing movement, saying Whitmer should “make a deal” with the demonstrators.

“The governor of Michigan should give a little, and put out the fire,” the president wrote on Twitter. “These are very good people, but they are angry. They want their lives back again, safely! See them, talk to them, make a deal.”

When asked if it was appropriate for the president to express support for protests in which “long guns” were carried on Friday afternoon, the White House press secretary, Kayleigh McEnany, said the president supported the right to protest within the law and while following federal social distancing guidelines.

“The president says that we must protest lawfully and act within the bounds of the law,” said McEnany.

The staggering effects of the pandemic among Whitmer’s electorate in terms of both illness and unemployment have placed a nationwide focus on Michigan, which is certain to be a key battleground state in the upcoming presidential election. The state had long been regarded as a Democratic stronghold but went for Trump four years ago, helping to spring his surprise electoral victory.