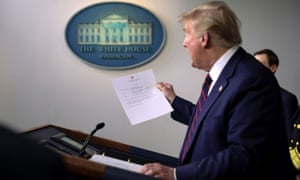 Sean Conley, the doctor who acceded to Donald Trump’s request to be given a drug unproven to treat the coronavirus, is a US navy veteran and is qualified in osteopathic medicine.

Conley, who is from Pennsylvania, graduated from the Philadelphia College of Osteopathic Medicine in 2006 and went on to undertake a medical residency at a navy base in Virginia. He was then deployed to Afghanistan, where he acted as head of a trauma unit at a Nato base.

The medical unit at the White House is typically staffed by doctors drawn from the US military and Conley found himself in line to become the president’s own physician after the departure of Ronny Jackson, who had previously raised eyebrows by praising Trump’s “good genes” and for saying that if the president had had “a healthier diet over the last 20 years, he might live to be 200 years old”.

Jackson had also sparked a short-lived “girther” conspiracy movement after reporting Trump’s weight as 239lb, just 1lb below a threshold that would class the president as obese. Trump sleeps just four or five hours a night, doesn’t exercise outside rounds of golf and is fond of McDonald’s but is fit enough for a second term, Jackson reported in 2018.

The position of presidential physician, formally established by Congress in 1928, is usually a low-profile and uneventful one. Daniel Ruge had to care for Ronald Reagan after the then president was shot in 1981 but still described the job as “vastly overrated, boring and not medically challenging”. Ruge recalled having little to do for his only patient, spending state dinners in his office wearing formal dress doing crossword puzzles, in case an emergency arose.

Conley, who became the president’s physician in May 2018, had also largely steered clear of public attention until Trump’s extraordinary claim that he has been taking hydroxychloroquine, an anti-malarial drug.

Trump has repeatedly touted the drug as a treatment for Covid-19, despite it not having gone through any clinical trials or approvals for this use. The Food and Drug Administration has warned against taking the drug outside a clinical trial or emergency hospital intervention, citing potential heart problems.

Despite these warnings, and the fact Trump has not tested positive for Covid-19, Conley wrote a memo stating that following discussions with the president they concluded that the “potential benefit from treatment outweighed the relative risks” of taking hydroxychloroquine.

Conley also confirmed in the memo that Trump is in good health.

Describing his consultation with Conley, Trump said on Monday: “I asked him ‘what do you think?’ He said ‘Well, if you’d like it.’ I said ‘Yeah, I’d like it. I’d like to take it.’”

“Here’s my evidence: I get a lot of positive calls about it,” the president added. “So far, I seem to be OK.”